A. A change to allow Accessory Dwelling Units in all zones. Truly a win-win-win.

Email ThisBlogThis!Share to TwitterShare to FacebookShare to Pinterest
Labels: Accessory dwellings, Denver zoning, sustainability
Why is the blog all black?

To save energy, of course:

ABOUT BLACKLE
Blackle saves energy because the screen is predominantly black. "Image displayed is primarily a function of the user's color settings and desktop graphics, as well as the color and size of open application windows; a given monitor requires more power to display a white (or light) screen than a black (or dark) screen." Roberson et al, 2002

In January 2007 a blog post titled Black Google Would Save 750 Megawatt-hours a Year proposed the theory that a black version of the Google search engine would save a fair bit of energy due to the popularity of the search engine. Since then there has been skepticism
about the significance of the energy savings that can be achieved and the cost in terms of readability of black web pages.
Posted by Kevin Dickson at 10:11 PM No comments:

Green building is VERY climate/site/zoning/architectural program specific, so Denver needs these specific recommendations to guide design. This draft addresses sustainable homebuilding in the City of Denver with its specific zoning and building codes.

It should be noted that when Quick Wins eliminated Denver's solar bulk plane, there have been few incentives for incorporating solar energy into home design.

In his words, “But for the mean time, at least here in Colorado where the utiity is REQUIRED to buy back excess electrical production, I'm thinking PV solar makes more sense for the world as a whole. If during the summer months, the dwelling to which the array is attached can not use the electricity being produced by the PV system, it goes back into the grid, helping to offset the demand imparted to the grid from cooling loads.”

When taking this idea further in the R-2 zone, you discover that new construction duplexes don’t lend themselves well to solar. We should allow 22’ wide 2.5 story homes on 25’ lots. Gabled roofs would be the preferred solar configuration. PV cells would be on the south side, silver galvalume metal roof on the north side (see photo). The silver metal is designed to reflect sunlight onto the PV cells of the adjacent house, nearly doubling their electrical output. Optionally, an unglazed thermal collection system such as Dawn Solar or Warm Board could be integrated underneath the PV cells. This thermal energy would be 100% of the domestic hot water load on all sunny days above 40 deg. F. 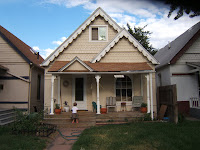 This from the Leonardo Energy website:
"Italy is currently undertaking a programme to install 30 million smart meters. It is estimated that demand-side management tariffs, which limit customers to 3KW of power during peak periods, have reduced peak demand by 5% for 3 hours, 10 days a year. This has removed the need to construct a power station with 2GW capacity to cover the peak demand."

20. Keep an eye on LED lighting. The currently available bulbs are too dim and too expensive now, but they have good potential. The service life will be much longer than CFL's, and the light is more pleasing. Edit: LED's are now affordable, if still dim.

21. Greywater Heat Recovery is Easy. GFX Technology manufactures a heat exchanger that reclaims most of the heat from showers that normally goes down the drain.

Builders interested in capitalizing on the growing "scrape and build" phenomenon in Denver are well-advised to keep up with impending 'green' changes to the building and zoning codes:

Denver Climate Action Plan
Posted by Kevin Dickson at 8:55 AM No comments: