Just a few days after my post about passive solar thermal water heating, the grandson of the Arthur D. Little collector design came to my attention. Called the Solar Cache by Harpiris Energy, it has been designed only for non-freezing climates. With PEX pipe, which may be considered freeze tolerant, this will be a great product for economy installations, costing far less than the usual $6k solar DHW systems for freezing climates.

Ironically, a common complaint from solar DHW system owners may cause pumps to appear in these passive systems. See, most systems have a solar preheat tank (with the Sun Cache the solar tank is on the roof), and a backup (fossil fuel) tank piped downstream in series. If the homeowner doesn't consume any hot water (like all day when he's at work) then the backup tank fires to make up for standyby losses, even though the preheat tank may be 140F or higher. In the summer, a solar system should be providing 100% of the hot water load on sunny days, so some homeowners get peeved when their gas bill isn't zero and the backup tank is coming on every hour or so. A really tiny recirculating pump with a simple control is a way to prevent the problem, but now you've added a pump to an otherwise elegantly simple system. The other beef with the "uninsulated" storage tank on the roof is that you'll never have any solar hot water left for the morning shower, the storage water will drop close to outdoor ambient by morning.

Rheem has also come out with a passive collector with some freeze tolerance. The collector loop is charged with antifreeze. Again, great care should be used on the supply pipe, even in "non-freezing" climates.
Posted by Kevin Dickson at 8:20 PM 1 comment:

I don't know if clay-based or concrete tile roofing qualifies for the discount, which is about 30%. Both of those systems, however, require a significantly stronger roof structure due to the higher dead load. (edited 2/10)

So, I got a premium-looking roof that pays for itself in ten years compared to asphalt shingles.

It's a very green choice because the steel is recyclable, and guaranteed for 50 years.
Posted by Kevin Dickson at 8:07 AM 2 comments:

Email ThisBlogThis!Share to TwitterShare to FacebookShare to Pinterest
Labels: roofing

I have remained on the sidelines with regard to promoting green roofs. I'm hesitant partly because many people in the multifamily industry have this saying that goes "flat roofs always leak".

In my own experience, the most frequent and worst leaks occur at the low spots where ponding occurs. A pond on your roof causes dust in the air to stick to the surface of the water. Over time, this dust builds up and starts looking like dirt, or soil. Seeds get blown into this muck, and sprout. I know this is a poorly designed ad-hoc green roof, but the fact remains that leaks never start in the dry spots on flat roofs.

I guess some sort of roof garden would be nice if you also had a roof deck and actually used it.

"Green roofs? Grass and dirt are not energy efficient.Work with me here. Which saves more energy—2 inches of dirt or 2 inches of insulation? Which saves more energy—grass or a white colored membrane? Which is more expensive and does not save energy—grass and dirt or insulation and a white colored membrane? Which needs to be watered to keep the grass from dying and blowing away? But they are beautiful and look cool. And that apparently is more important than cost and energy savings. Okay, I can live with the beautiful and looking cool argument if that is in fact the argument—but don’t clutter it with half-truths such as heat island effects and water run-off. There are other (better) ways to deal with each."

He goes on to admit he won't win the argument, so he provides the proper drawing detail that works.

In semi-arid Denver, I'll posit that the money spent for the water needed to keep your roof alive will be far more than the dollar value of any perceived benefit.
Posted by Kevin Dickson at 10:50 AM 4 comments:

To some, the holy grail of solar thermal is a system without pumps and controls.

Himin of China manufactures a nice one: 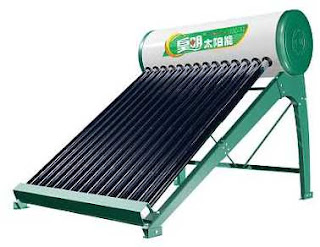 At Solaron in the '80's, we purchased the manufacturing rights to a passive DHW design developed by Arthur D. Little. The problem was that the pipes going to the collector would freeze in the winter. Frozen pipes in the attic were so undesirable and difficult to eliminate that we ultimately abandoned the whole project. As far as I know, no one is pursuing this type of design in northern climates.

Now that building codes are beginning to actually recommend insulated roof planes and conditioned attics, the Chinese design looks very interesting. The pipes in the attic won't freeze because the attic is inside the house envelope. As long as the piping to the roof-mounted tank is kept extremely short, it won't freeze either. Natural convection within the pipe and heat conduction along the pipe from the tank and the attic area would prevent freezing.

Note that the water in the evacuated tubes probably won't freeze.  Every day they warm up a bit even if the day is completely overcast.  This insolation should be enough to prevent freezing even under the worst conditions in Denver.

From Arthur D. Little, we also learned that the roof-mounted tank will never approach freezing temperatures anywhere in the continental US. (Basically there's enough solar insolation even on completely cloudy days to keep the tank above 40 degrees)

The main attraction of this design is that system efficiencies are far superior to pumped designs. Also, with no moving parts to fail, the life-cycle cost is held low, and the ROI is maximized.