Chris Kennel, a thoughtful resident of Southeast Denver, recently submitted his thoughts to Doug Linkhart on the solar access issue:

"At the Thursday Nov. 19 council meeting I spoke with some advocates of solar access because I plan to install a photoelectric array on my roof and am curious about their ideas. Every solar access advocate I spoke with seemed well-meaning, but I didn't find that any of them had thoroughly considered the implications of their plans. That is why I have chosen to write this letter to you.

Each of these solar uses functions differently at different times of the year and therefore has different requirements in terms of access to the sun. This means that a one size fits all approach would either not address each area appropriately or be totally overkill for some areas.

Lets look at each area, starting with the most restrictive one: passive solar. Passive solar, used for heating and lighting is most beneficial when the sun is low in the sky in the winter. In the summer, passive solar is unwanted since it adversely affects indoor comfort and raises the cooling costs of a home. If people want direct sunlight in their first story windows during the winter months, then it
would preclude the design of most of our existing city blocks. In the morning during the winter months, the sun is so low in the sky that an object 2 feet high will cast a shadow 10 feet long at 8 am in the morning. At noon, when the sun is highest, the same shadow would be created by an object that's about 5 feet tall. This means that if someone has a window on their first floor, the roof or gable of neighboring single story house that's 10 feet away to the south would very likely shade its
neighbor to the north. To get unobstructed winter light into a house at noon would require the neighbor's house to be located at least 20 feet away if it's a single story. For morning light, the neighbor would have to be about 40 feet away, and this gets even larger if the southern neighbor's home is a two story.

The third most restrictive solar access issue is gardening. This activity usually happens during the summer months when the sun is higher in the sky, and most sun-loving plants like tomatoes require about 8 hours of sunlight per day to thrive. A single story house would cast a 15 foot shadow and a 2 story house would cast a 25 foot shadow during parts of this timeframe. For gables facing north add another 7 feet to these numbers. People with large lots should be fine, but narrow lots would
receive too much shade for the most sun-loving plants. People with narrow lots could grow plants that tolerate partial shade since from 10 am to 2 pm the shadows from the worst case scenario, a two story house with gable would only cast a 14 foot long shadow.

The most flexible solar access issue is photovoltaic panels. These panels function most effectively in the summer months when the sun is more direct and intense. During the winter months, their output is substantially reduced, so winter solar access shouldn't be over prioritized. Photovoltaics function best from 10 am to 2 pm, and it's unlikely that even a two story neighbor would shade the roof of a single story house to the north during this timeframe in the summer. The more likely
source of shading is from a chimney on the homeowner's own house or a tree. Photovoltaic panels have a weakness in that if any part of a single panel gets shaded, it knocks out the entire panel and in many cases the entire array or branch circuit. Even a leafless deciduous tree in the winter can cast enough of a shadow to knock out a photovoltaic panel. So if photovoltaic panels are given some special status with regard to solar access then it may result in severe tree pruning and even removal, especially to the city's larger and older trees.

Since trees have many benefits, it seems important to exempt them from any rules regarding solar access. Otherwise neighbors will be trying to trim the trees that other neighbors or the city (via parks and greenbelts) own. Even at my house I have some trees that cast shadows over 100 feet long during the winter months, and my trees are only medium sized. I live in a suburban neighborhood so these trees don't affect my neighbors much, but medium sized and larger trees in an urban neighborhood could conceivably cast shadows across four or more lots.

Although solar access sounds nice in theory, creating solar access rules in excess of our current bulk planes is certain to cause a lot of problems. For the group of of Denver residents who place a premium on solar access (and I am one of them), the best and easiest solution is to choose a site that has a park, street, drainage ditch, or other form of undeveloped open space to the south. A second option is to buy a house that's located on the northern most part of its lot.

Not all homes in Denver are equal in many regards, and solar access shouldn't be viewed as a right but rather as a feature. Although I might like my suburban house to be within 5 blocks of a light rail station, a park as good as Washington Park, a bike path, stream, and an excellent coffee house, I can't expect the city to give me all these things. Solar access is similar. Solar access is a function of location, topography, and the direction a home is pointed. As such it has value to some people, but it cannot be equal throughout all of Denver.

For people who do not want to move to a home that has good solar access, there are alternatives. Instead of photovoltaic panels, they can buy renewable power through Xcel energy's wind source program. People who want fresh, local produce can join a CSA (community supported agriculture), participate in a community garden, or visit the farmers' markets instead of planting their own gardens. If someone suffers from SAD (seasonal affective disorder) in the winter they can buy a light therapy box (my wife and I have one and it works great) instead of relying on passive solar light.
Lastly, people who want to reduce their heating costs can better winterize their homes as an alternative to using solar hot water panels or passive solar designs. Better winterization will also make a house more comfortable and energy efficient in the summer. All of these are good options for people who do not have the guaranteed solar access they wish for. It's likely that they've chosen where they live due to other redeeming factors.

Thank you also for your hard work on the rezoning project.

Note: As Douglas Farr and myself have been advocating, the best place for your photovoltaic system is on a two story garage on the alley. Xcel energy is already trimming the trees back there to protect the power lines. The most likely source of shade will then be a pine tree to the south. Try to get an agreement with that neighbor to allow you to prune that tree as required. If he won't grant permission for free, offer some money for a solar easement. You'll eventually earn all that money back and more.
Posted by Kevin Dickson at 4:10 PM No comments:

Your New Zero Energy Cost Home Must Be All Electric

Xcel Energy currently charges $10.28/month just to hook you up to gas. That means if you do a great job of design and building, and drive your gas usage to zero, you still pay over $120/yr for the privilege of gas heat backup. You can install a huge PV or thermal solar system, but it won't eliminate that charge.

So the easiest way to get rid of it is to eliminate gas to the house.

For all you chefs out there who love to cook with gas, remember that it puts quite a bit of CO into your home. You may want to check out induction cooktops which reduce the chances of anyone burning themselves, and actually heat quicker and more energy efficiently than gas.
Posted by Kevin Dickson at 8:33 AM 1 comment: 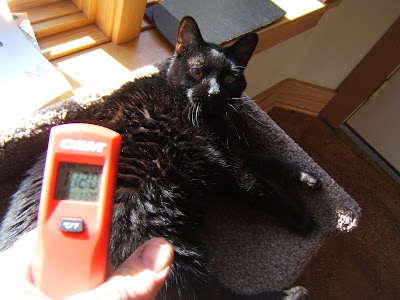 Did you ever wonder what the surface temperature is of your solar kitty?
As you can see, Natasha runs about 112F on a clear, cold winter day in Denver. Note: she is laying in front of a window with an SHGC (solar heat gain coefficient)of 0.56. That's far higher than the average low E window which has an SHGC of about .32. What's that mean to a cat? About 15F. A black surface in front of a conventional low E window under the same conditions is around 97F. Still warm, but that's a significant penalty for not specifying the right windows.
Hurd "hard coat low E" windows from Rocky Mountain Solar Glass has been the only local solution I have found for passive solar. Serious Windows (formerly Alpen) should also be able to supply a high SHGC low E window. Most other window suppliers and manufacturers have no clue about this issue.

Increased solar gain in the summer isn't a concern, because these are south facing windows. In the summer, the sun is high in the sky, and the window is completely shaded by the properly designed overhangs. Even the Energy Star program is silent on this, although their energy modeling computer programs do give credit for high SHGC windows on the south side.
Posted by Kevin Dickson at 12:58 PM 3 comments: 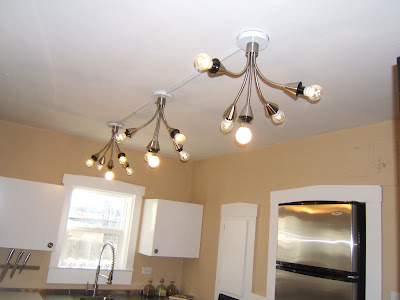 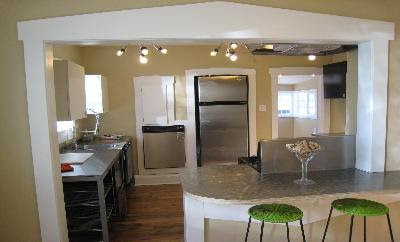 Here's a photo of the aforementioned lighting "hack".

It took 15 of the 1.5 watt LED bulbs to generate enough light for this kitchen remodel. Current cost: $4 each.
This configuration will use about eight times less electricity and save about $45 per year, including replacement costs. That's a 16 month payback.
Posted by Kevin Dickson at 8:19 PM 1 comment: